It was Memorial Day (May 25th) all the way back in 2009. Instead of being at a family BBQ celebrating like most people were that day, we were racing behind an ambulance heading from one hospital to another. Soon that ambulance would not be fast enough, so things turned to a helicopter that was taking our hours-old infant son Oliver to a Level 3 NICU hospital an hour away.

We were in absolute shock and disbelief. Obviously, none of this was going according to plan. We had no idea what to do at that moment, but as time would tell (and this article will explain)… we actually knew exactly what to do.

Oliver’s birth was extremely fast and ended up being very traumatic. He was delivered on the very first push, shooting out like a rocket in almost an instant once my wife began pushing. Our birth team (midwife, doula, etc.) was not prepared and simply put, did not catch him.

My wife delivered him on “all fours” on the bed, leading to Oliver falling and landing with his head and neck flexed on the bed. Essentially, a whiplash-like injury to the most precious and important aspect of human health – the brain stem and spinal cord.

Since that exact area of the brain and nervous system are responsible for activating and regulating vital life functions such as breathing and our heartbeat, he had neither.

There was no cry, no movement, nothing. He was blue (cyanotic) and had no heartbeat.

Immediately the medical team hooked him up to oxygen and emergency life-saving medical technology, and immediately I did something that happens in maybe 1 out of millions and millions of births – I flipped him over, umbilical cord still attached, and made a chiropractic adjustment to the part of his nervous system known to activate breathing, heartbeat, and fluid release!

Yep, thank God for the medical team… and thank God that literally just one year before, I had completed my post-doctorate certification in Pediatric Chiropractic and had become an expert in one thing – birth trauma.

This is the sort of story that only God can bring to life. And that’s exactly what the combination of both medicine and chiropractic did for Oliver – brought LIFE back to him!

While birth trauma is not something that only affects the health and well-being of the baby (moms, dads, entire families are affected), we will be focusing on the negative health effects of birth trauma on children today exclusively with this article.

What is Birth Trauma?

Birth trauma is any trauma or injury, most commonly physical, that happens during the labor and delivery process, and often leads to lifelong health challenges, disabilities, and neurological problems.

In our opinion, birth trauma is the single most overlooked causative factor of the massive rise in chronic illness in our kids today. It leads to “short term” and long term problems in kids. Again and again, we see birth trauma correlated with things like:

Birth trauma is most commonly physical in nature. It can come from all the various forms of birth intervention like epidurals, inductions, forceps or vacuum extraction, fetal cord monitoring, and c-section deliveries – such as in Landon’s case.

Additionally, it’s important to note that birth trauma can vary significantly in severity. Most cases go completely undetected and unnoticed by the traditional medical team.

Birth can be extremely traumatic for both mother and baby, yet documented and described as “normal” and ordinary. Sadly in today’s world, things have to go dramatically wrong to get the attention of the traditional medical system.

To keep it quite simple, the longer labor and delivery goes on, and the more intervention that starts to stack up – the more traumatic the birth.

Additionally, things like forceps, vacuum extraction, and emergency c-section typically are associated with the worst health outcomes for the child.

What are the Effects of Birth Trauma?

As listed above, the negative health effects of birth trauma on the child are far-reaching and really can be connected to almost every pediatric health condition.

The reason for this is actually quite simple to understand – the location and system most negatively affected by physical (and toxic) birth trauma is the central or autonomic nervous system.

When the function of this system is altered and thrown off course right in the very first moments of life, it creates a condition known as dysautonomia.

Nerding out just a bit more, the real key to all of these early and later life health challenges are tied to a very important nerve, called the vagus nerve. The Vagus Nerve is responsible for coordinating our heart rate, breathing, digestion, immune function, social and emotional regulation, and so much more.

The Vagus Nerve is most easily injured via birth trauma simply because of its location. This vitally important nerve originates (comes from) the lower brainstem area, and then makes its way down through the cervical spine (neck) and all the way into the thorax and abdomen. This is why it’s long been called the “wandering” nerve.

Perhaps more appropriately, we call it the “Air Traffic Control” or “Operating System” nerve. It truly does need to be at 100% function for our children to have 100% health throughout life.

This physical injury to the Vagus Nerve, brainstem, and other areas of the nervous system via birth trauma is what Pediatric Chiropractors call a subluxation.

“There is a 99% chance Oliver will have a life full of neurological damage and challenges such as seizures, cerebral palsy, and autism. He’ll likely never walk and never talk.”

That was what the best of the best Harvard-trained medical neurology team told us once Oliver had made it out of his 3 life-saving surgeries. I’ll never forget that conversation, the room we were in, and the look of despair on my beautiful wife’s face when we heard that prognosis.

“I don’t believe in chiropractic.”

Those are words I’ve heard again and again in my career as a Pediatric and Family Chiropractor. Not near as much anymore today thankfully as parents are getting more educated and informed. But I’ve heard it plenty nonetheless.

I gotta tell you moms and dads – I didn’t believe those medical neurologists when they told me my son was certain to have a life full of seizures and neurological disabilities.

Why? Because I knew what they didn’t – that neurologically-focused, specialized chiropractic adjustments can and would restore full function to his brain, brainstem, vagus nerve, and autonomic nervous system.

I knew he was subluxated and had the worst case of dysautonomia and birth trauma I had ever seen (and likely ever would). But I also knew this – I could help.

At this point in my career, just 3 years in, I had already been able to help teenagers and young adults with seizures, anxiety, autism, and other chronic neurological challenges see vast improvements and healing… so, why couldn’t Oliver?

While he had experienced true brain injury and damage (his original MRI and EEG findings were so bad that only 20% of children with that level of damage even live past age one), he also had one very important thing on his side – neuroplasticity.

That is a whole other article for another day, but that big word simply means one thing – the brain and nervous system can heal.

God designed us to be resilient, adaptable, and “plastic” with our nervous systems. In fact, the younger the child and “newer” the brain – the faster, bigger, and more complete healing we can expect!

I provided neurologically-focused, tonal adjustments to Oliver’s nervous system multiple times per day during his 6-week NICU stay. Then once home, I adjusted him daily for months on end.

As an infant, he was not all the way in the clear just yet. He still struggled with every cold, seasonal change, teething, and growth spurt. Each time he’d get congested and have to battle through croup and RSV.

Once again we were faced with a choice – traditional medications (Tylenol, antibiotics, steroids, etc.) or chiropractic adjustments and natural measures. We had already gotten him off all seizure medications before we left the hospital, so the last thing we wanted to do was turn to these run of medications for his immune system and leave him with immune suppression and weakness for life.

We fought through. And, we made it through! 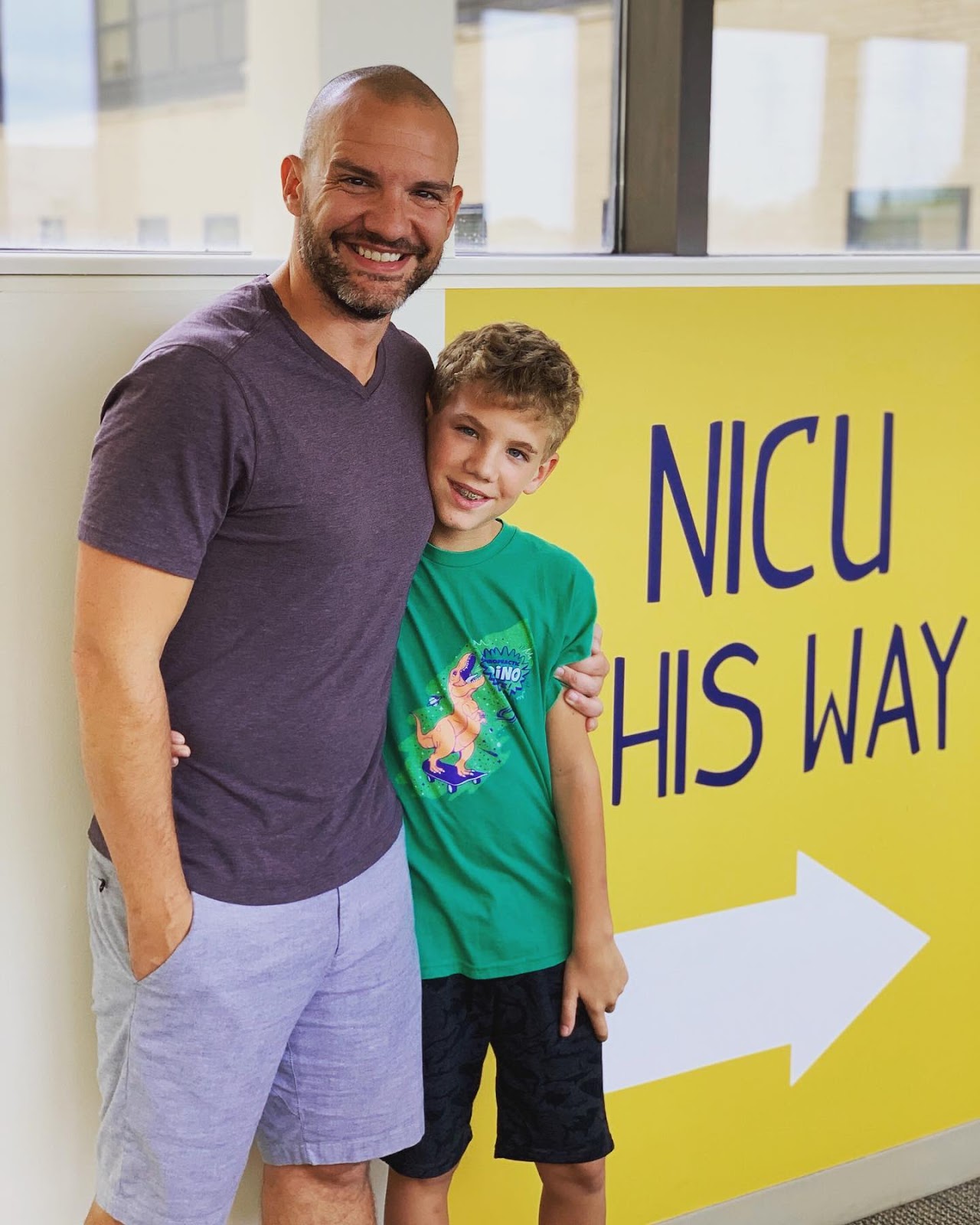 That picture was taken as we visited the same NICU that saved his life to help support and care for another infant and family in need a few years back.

Oliver never had another seizure. His EEG and MRI completely cleared up. His cardiac and respiratory function is 100% perfect. His digestive and immune systems are strong as a bull (we live on a farm). His entire brain and neurodevelopment have also been on point!

He’s an A+ student, an amazing athlete, and the most humble, heart-centered, helpful kid out there! He’s our Chiro Miracle Man!

If you suspect that some or all of your child’s health challenges are possibly related to birth trauma and subluxation, you at least deserve to find out!

Our PX Docs are the only trained professionals in all of healthcare who really know how to dig deep enough to look for birth trauma, and then be able to help.

You can learn more about the PX Docs Clinical Process and then visit our PX Docs Directory here to get your Consult scheduled right away with a local PX Doc in your area!

Just get connected, schedule a consultation, and give Pediatric Chiropractic a chance to find and care for your child’s birth trauma.

God bless and be well,

How can chiropractic care help?

How do I get my child’s health back?  It seems like every cold, fever, rash or illness...

END_OF_DOCUMENT_TOKEN_TO_BE_REPLACED

Imagine being a parent of a little boy who is growing like a weed, but hardly eating....

END_OF_DOCUMENT_TOKEN_TO_BE_REPLACED

While traditional medicine relies primarily on symptoms and looks for obvious pathology...