Seizures: What You Should Know For a parent, very few things are worse than watching your child have a seizure. I know this firsthand as a father. I also know this from doing all I can caring for hundreds of seizure patients in our clinical practice, listening in to the struggles and stories so many parents have shared about their child’s battles with seizures and epilepsy.

So let me just come right out and say it — seizures suck.

On top of that, so do most of the standard medical treatment options for seizures — heavy doses of hard-hitting medications that come with a litany of serious side effects or for the toughest of cases, brain surgery.

For the most part, still today that’s about all traditional medicine has to offer. Now thankfully like all things in that world, they can and often are life-saving. But they also themselves can be life-altering.

When you look at the long list of nasty side effects from these drugs, you wouldn’t wish that upon your worst enemy. So you certainly don’t want that for your child. But most parents feel like they have no other choice, because seizures are so very awful, scary, and are of course a very serious neurological condition.

We certainly felt that way when our son Oliver experienced a traumatic birth that led to a brain injury and seizures. His medical neurologists at the time told him he absolutely needed to be on 2-3 seizure medications for the rest of his life.

We knew obviously how serious his brain and neurological injury were, but we also knew how much those medications were certain to delay his brain development and function massively. If we kept him on those medications and he never developed a fully functional, healthy brain and nervous system… how could we really be sure what caused that? The injury or the medications?

So for Oliver, we set out on a path to do everything we could to help his brain and nervous system heal without medications, and it worked! He left the hospital six weeks later off all medications, seizure-free, and with a clear MRI and EEG.

While all the way back 13 years ago now for Oliver the leading neurologists couldn’t quite make sense of how he saw such incredible changes and full neurological healing, it’s honestly not that super complicated.

This article will also lay out that potential path for you and for so many parents — it’s exactly what they’ve been searching for all along!

Signs and Symptoms of Seizures

A seizure is a sudden, uncontrolled neurological disturbance in the brain. The brain and nervous system function as our body’s electrical or wiring system, and thus a seizure often is described as a “blown fuse” or “short” in a wire.

Because the brain and nervous system literally control every tissue, cell, and organ in our body, seizures are known to cause changes in behavior, consciousness, movement, and more. Symptoms can include things that are hard to notice such as temporary confusion and staring spells, or impossible-to-miss type symptoms such as uncontrollable jerking movements, spasms and contracture of muscles, and major cognitive and emotional symptoms such as fear, anxiety, anger, and more.

Seizures are also a sign of potential epilepsy. Having two or more seizures at least 24 hours apart that isn’t brought on by an identifiable cause is generally considered to be epilepsy.

This is where so many parents have their struggles compounded. It can be quite clear their child is having seizures, but the medical system may not be able to locate and pinpoint an identifiable cause or even find the presence of seizure activity on the most common medical exam for seizures, an EEG.

Where parents get frustrated is that not only do they have a true handle on the root cause, but those cases are still most commonly put on heavy-hitting seizure medications even if the EEG or other medical exams don’t find the actual presence of seizures.

Just like the seizures themselves come from the complex and intricate nervous system, sorting out the various types of seizures can be confusing as well. This list will help:

Looking at things a little deeper with this information on the various seizure types brings us to something that has been a long-standing frustration with the traditional medical approach and examination of seizures — they look for them only in the brain.

Now, this may sound overly simple (because it is), but the brain is not the only part of the body that makes up the central nervous system. The brain is directly and intimately connected to the brainstem, spinal cord, and sensory nerves that travel from the neurospinal system back and forth to the muscles, tissues, organs, and glands.

In fact, in terms of multi-modal function, as well as muscle and organ control, the brainstem area could easily be considered more complex and intricate — making it a very likely suspect in the case of various seizure types.

While many of our seizure patients have had documented traumatic brain injuries, many more have not. But in the latter group, nearly every single case we’ve seen clinically in the past 10+ years has had a case history that includes significant stress during the prenatal period, as well as birth intervention that likely led to trauma and injury to the brainstem, vagus nerve, and autonomic nervous system.

Because the standard medical neurologist is not trained to look deep enough into a child’s case history, and also has no training in assessing the neurospinal and central nervous system in a more functional manner. These potential links to subluxation and dysautonomia are grossly overlooked still today.

How to Care for Seizures Naturally

Before we go deep into this final section of this article, we must first sadly share that not much high-level clinical research has been done just yet on caring for seizures without the use of drugs and surgery. The traditional medical system is an enormously huge ship, and it takes literally decades to change procedures and common practices in that world.

So if you take this conversation to your traditional medical neurologist and want to talk about things like birth trauma, subluxation, and the vagus nerve as they relate to seizures… don’t expect to get too far just yet.

But that’s ok! Because there is a whole other set of professionals that are trained and even more advanced in their understanding of functional neurology, and they’re just waiting for their shot to help your child vastly improve their quality of life without all the side effects of medication and surgery!

Here’s how it works:

Step one is scheduling a consultation with a trained Pediatric Experience Doctor. Our network of neurologically-focused pediatric chiropractors know how to dive deep into a child’s case history unlike any other professional out there, listening and looking for the exact triggers and root cause factors of your child’s seizures.

Step two is finding out if your child has subluxation and dysautonomia or not. In order to do so, our network of PX Docs utilizes an incredible set of technology called the INSiGHT. These INSiGHT scans are entirely safe and non-invasive, and take just 15-20 minutes to run. They consist of three (3) individual s4cans that will find, measure, and quantify how much stress, tension, and subluxation is stuck in your child’s autonomic nervous system.

Pictured below is the NeuroSpinal EMG Scan for a recent 19-year-old seizure patient that went through our 2-Week Neuro Intensive Program (find out more about this incredible care option here), and experienced some absolutely incredible results not only with his seizures, but also anxiety and depression as well! 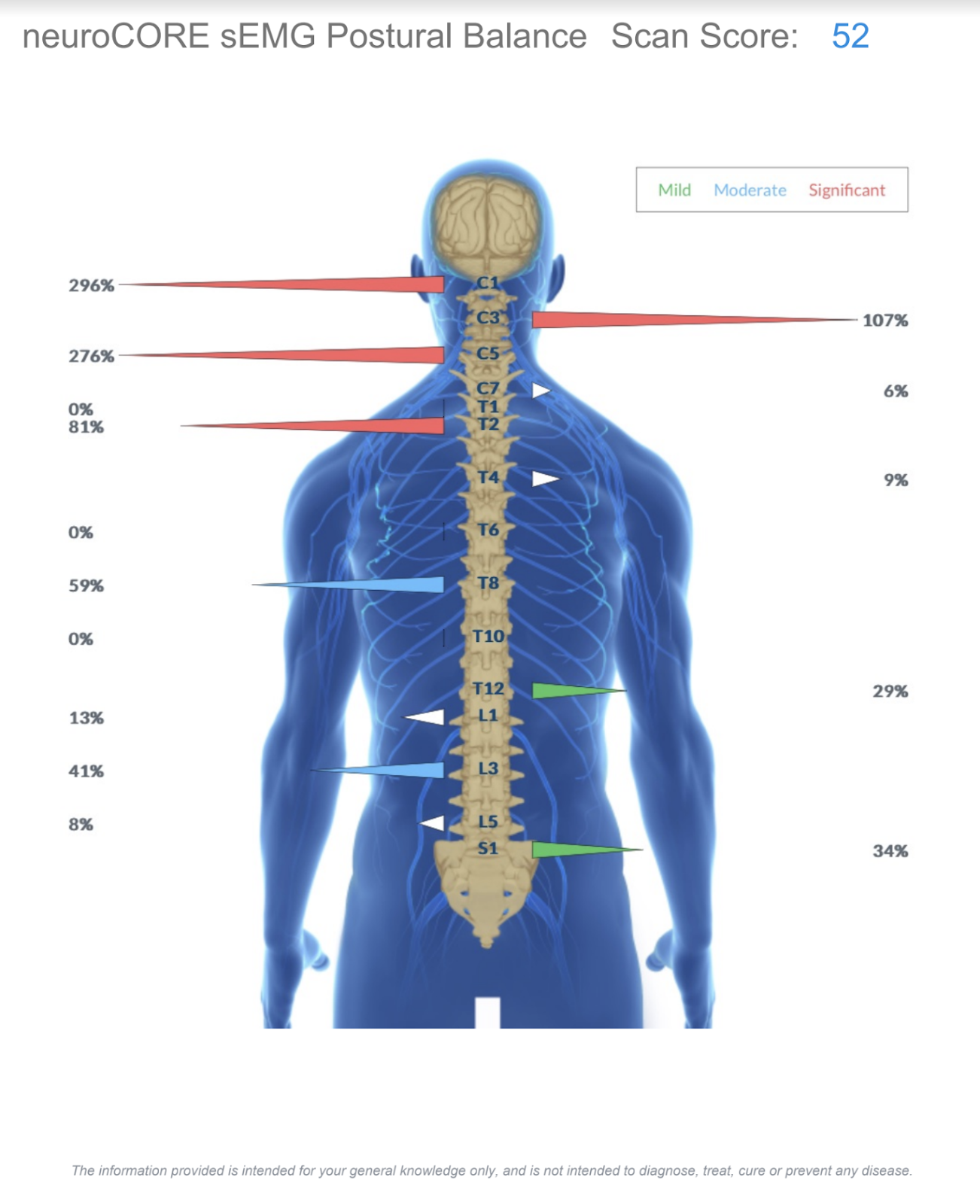 This sEMG scan is very similar in nature to what most seizure patients and parents are familiar with, a traditional brain EEG. However, instead of measuring just cortical brain function this technology actually measures and assesses stress, tension, and subluxation within the brainstem and neurospinal system.

Cole’s scan presents with the most common pattern seen in seizure patients – severe (red) tension in the brainstem and upper cervical region, with a counter-torque (back and forth) tension pattern and asymmetry. Interestingly in Cole’s case, his seizures would actually begin with spasms and tension building in his neck and shoulders first and then spread to the rest of his body.

Step three is figuring out an exact, customized Care Plan that fits your child’s exact needs. The exact ‘algorithm’ of this plan is determined by both the in-depth case history and scan findings just discussed in steps one and two of the PX Clinical Process.

Step four is sitting down with your PX Doc at the Report of Findings or Discovery visit, going over the INSiGHT and exam findings, your child’s customized care plan, and having every single one of your questions and concerns answered.

And finally, step five is getting your child adjusted and under the care of a trained PX Doc so that the subluxation and dysautonomia can be addressed in a safe, gentle, drug-free way!

If you need more information on any of the conditions or terms listed in this article, or on the INSiGHT Scans and PX Docs 5-Step Clinical Process, just click on the various links listed throughout this article to learn more. Or, connect with a PX Docs Care Advocate by sending us a message here!
And if you just know you’re ready to get your child the drug-free help that only Pediatric Chiropractic and PX Docs can provide, then head right over to our online directory and find your local PX Doc right away!

Reflux In Babies: How to help

“How much reflux is too much?”  Ask any new mom, and she’ll tell you her goals for...

END_OF_DOCUMENT_TOKEN_TO_BE_REPLACED

What are the Lasting Effects of C-Section Complications?

No two kids tell the story of how long-lasting the effects of C-section deliveries can...

END_OF_DOCUMENT_TOKEN_TO_BE_REPLACED

Carter’s parents knew something was wrong, they just didn’t know what. Worst of all,...